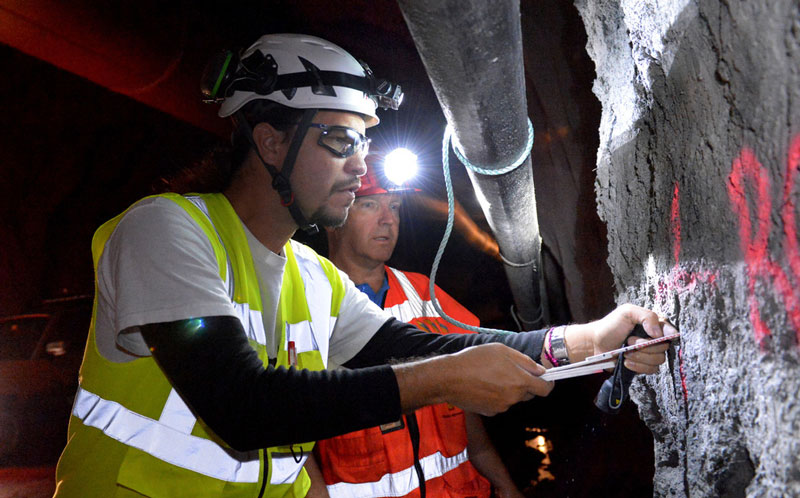 Safer and faster excavation due to seismic prediction

For the first time in Norwegian tunnelling, the use of seismic prediction is tested. According to the government agency for public roads – Statens vegvesen – the tests will verify if the seismic prediction could be a supplement to probe and core drilling.

Based on seismic reflection signals, a 3D picture of the rock mass quality is obtained. The results detect geology which is expected during the construction.

Despite that the seismic prediction is a common method in Europe, it has not been used in Norwegian tunnelling before. If the tests are successful, seismic surveying would be a useful tool during the Rogfast tunnelling project.

In Norway, seismic investigation is often used during the planning phase of subsea tunnels. It here informs about feasibility and tunnel alignment.

Nevertheless, seismic investigation was unusual during tunnel construction so far. Probe and core drilling are used to provide answer to what is behind the face. This is important information with respect to support and water leakages. Some rock types require more rock bolting than others.

These drillings are both expensive and time-consuming and therefore not commonly used. Seismic prediction however is cheaper and faster – it only takes five hours to get results.

The test was executed in the Hundvåg tunnel, which is part of the Ryfast project.

"We didn't use it so far because Norway has better rock conditions than the southern part of Europe. Even so it is a well-known method. I think that seismic prediction could be a supplement to probe and core drilling, also in Norway", said Ryfast senior geologist Øyvind Riste.

The Swiss company Amberg Technologies was visiting the Ryfast construction area to demonstrate the technology (Editor note: Amberg TSP 303 Plus).

“The method cannot entirely replace core drilling, as the accuracy is not good enough– but the technology may save us time", Riste states.

In four weeks, the tunnel excavation will determine if the predictions from the seismic investigation is corroborated by the geology mapped when excavating through the tested area.

If the test results are promising, this technology might be used in the Rogfast project. The project with its 27 kilometres long tunnel will be the world's longest underwater road tunnel.

In Europe contractors usually executes such tests. Despite that, the Rogfast project director, Tor Geir Espedal, would like to train the internal site supervisors in the use of the equipment.

"We may purchase one TSP system and use it in all tunnels. We will have eight parallel faces and the seismic investigation may become an effective tool for us", Espedal states.