Digitalisation will make inspection processes easier and more efficient. The aim is to reduce costs and optimise the sustainability of an infrastructure. The cloud solution from Amberg Inspection uses machine learning for semi-automatic damage detection, which will further increase productivity.

The system was used for the inspection of the approximately seven-kilometre-long Landecker Tunnel in Austria. We spoke to Kurt Mair, Project Manager at Amberg Engineering in Innsbruck, about the project and the advantages of Amberg Inspection. 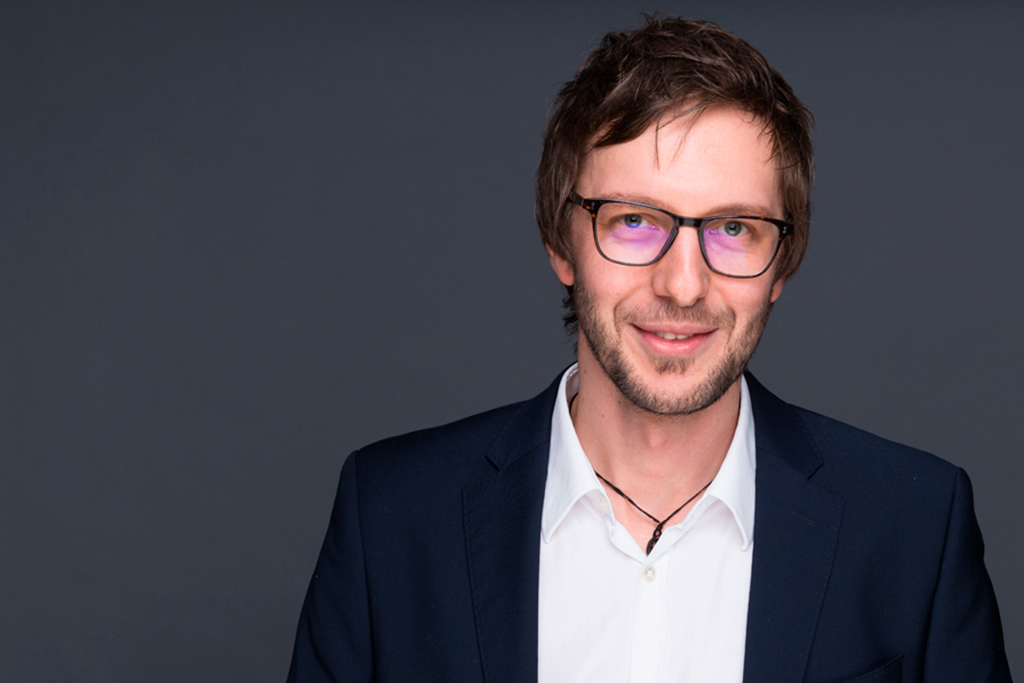 What is the condition of the Landecker Tunnel and why was an inspection necessary?

The Landecker Tunnel is a road tunnel with one tube, which was opened in 2000. According to a guideline of the Federal Ministry of Transport, an inspection (main tunnel inspection) must be carried out every twelve years. This was therefore a mandatory inspection.

The tunnel is structurally in good condition, but the requirements for escape routes according to the Road Tunnel Safety Act (STSG) and for ventilation (ventilation cross-sections and leaks) according to the guidelines and regulations for road traffic (RVS) are no longer met.

The ARGE Amberg Engineering Skava was commissioned by ASFiNAG (Highway and Expressway Financing Corporation) with a variant study for the elaboration of an optimised escape and ventilation concept, which corresponds to the "state of the art" according to RVS and STSG. In the course of this, the main tunnel inspection including tunnel scan, which was carried out by Amberg Technologies, was also commissioned. 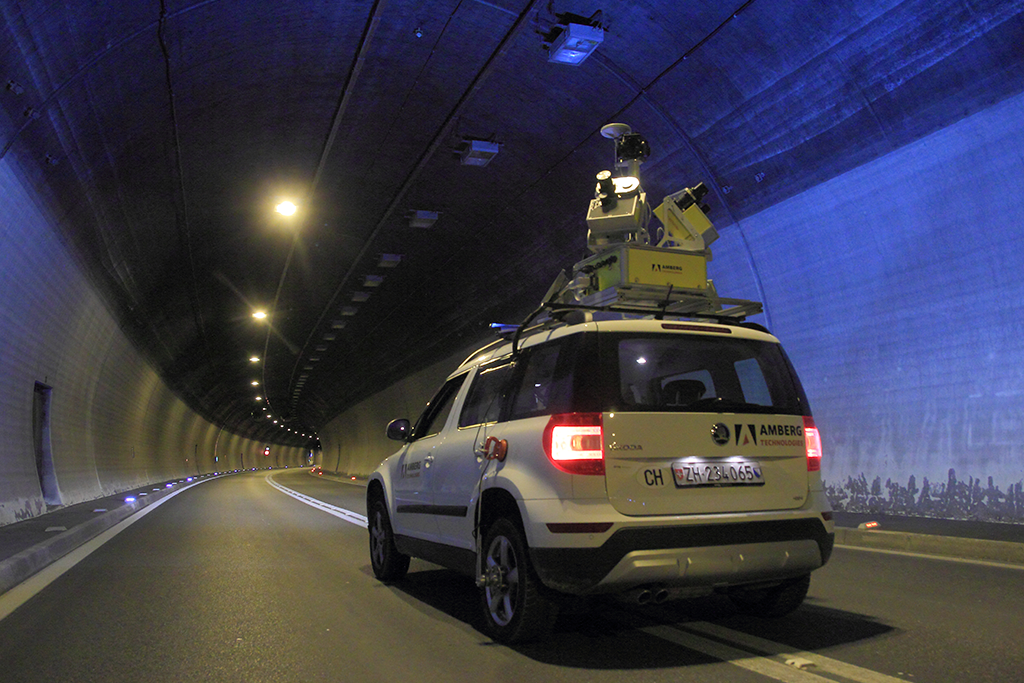 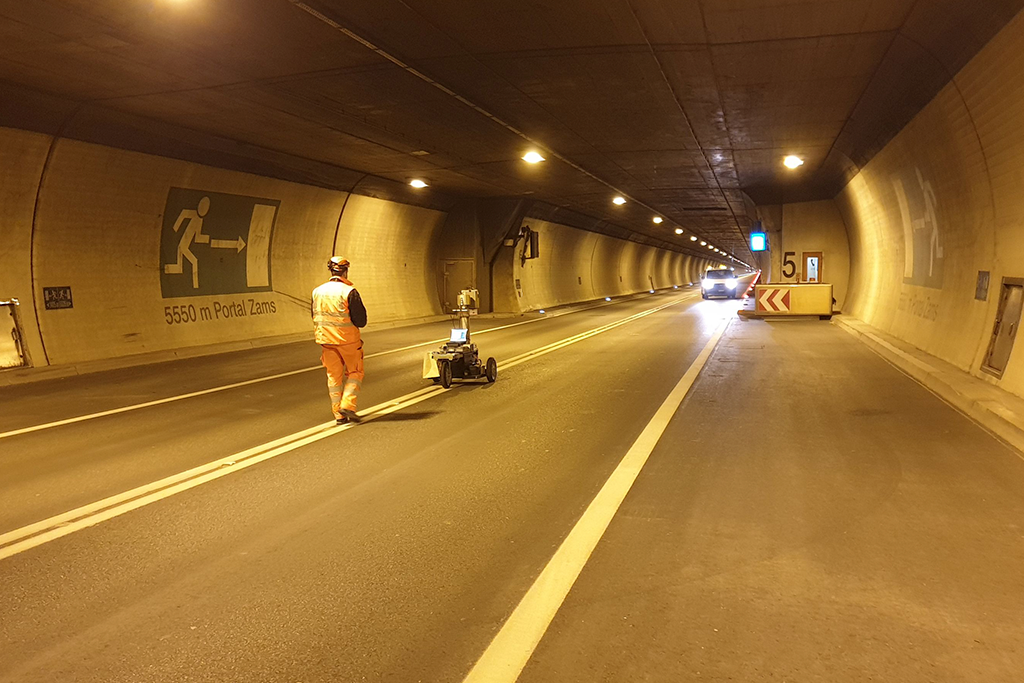 What were the customer's needs and why did they choose Amberg Inspection?

The inspection covered all accessible surfaces of the structures with the inclusion of cracks larger than 0.3mm, spalling, joint offsets and so on. The damage had to be mapped in the corresponding tunnel blocks and it was investigated which cracks could affect the stability and/or durability of the structure.

With the tool Amberg Inspection it is easy to enter damage images into the existing, finished scan. The specified damage catalogue of ASFiNAG was integrated into Amberg Inspection and the required damage patterns could be registered in advance in a preliminary inspection in the office and then on-site in the tunnel. A decisive point was above all the use of the tablets in the tunnel so that the damage could be confirmed or entered on-site, and costly post-processing was no longer necessary. 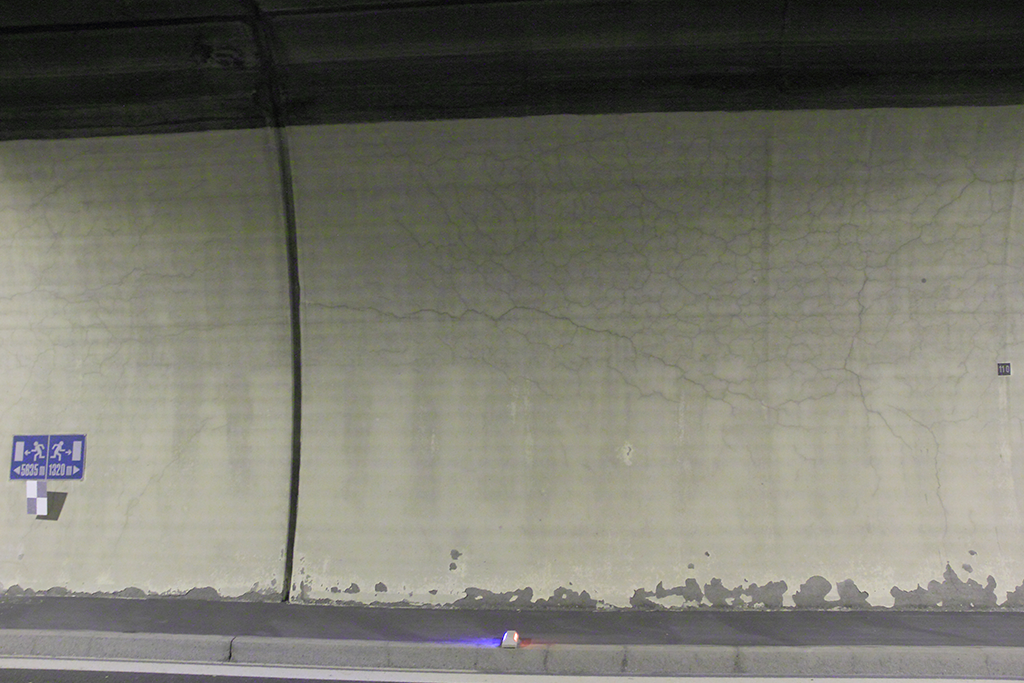 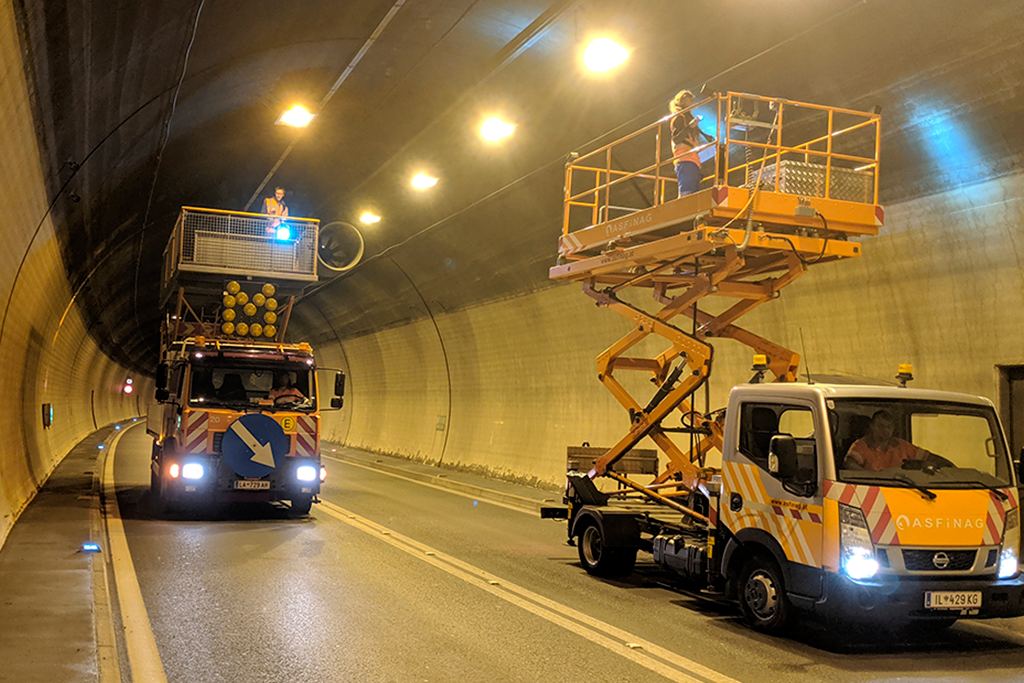 Cracks in the tunnel wall during the inspection

Amberg Inspection was used for the first time in practice in the Landecker Tunnel. How did the system prove itself?

We have made very good experiences with Amberg Inspection. The tunnel scan, including the stationing and block numbers, was stored in the Amberg Inspection Cloud by Amberg Technologies. Together with our partner Skava Consulting GmbH, we then entered the visible cracks and damage during the preliminary inspection in the office. The scan resolution allowed us to detect and enter cracks starting at 0.3 mm easily. These cracks could then be confirmed during the inspection in the tunnel and the actual crack widths were added. In some cases, damages had to be deleted or added, the effort for this was minimal, as the pre-inspection already reflected the actual damages very well.

How did the inspection of the Landecker Tunnel go?

Amberg Technologies provided us with two powerful tablets with which we carried out the main tunnel inspection on-site using Amberg Inspection. The tablets were attached to the body using special holders and could be operated with both hands using the touch screen while standing. This enabled a very fast entry of damages or a quick change of the entered crack widths. The tablets were operated offline in the tunnel, which is of course of great importance, as not all tunnels are equipped with an internet connection. The inspection of the approx. 7 km long driving tube could be completed within three days. Due to the good pre-inspection in the office, it was possible to complete the inspection on-site very quickly. We owe this time saving to the use of the Amberg Inspection Cloud. Furthermore, the post-processing time could be reduced to a minimum, as all required damages were already available in the cloud after the completed inspection in the tunnel and could also be exported to Excel files with allocation to the block numbers. 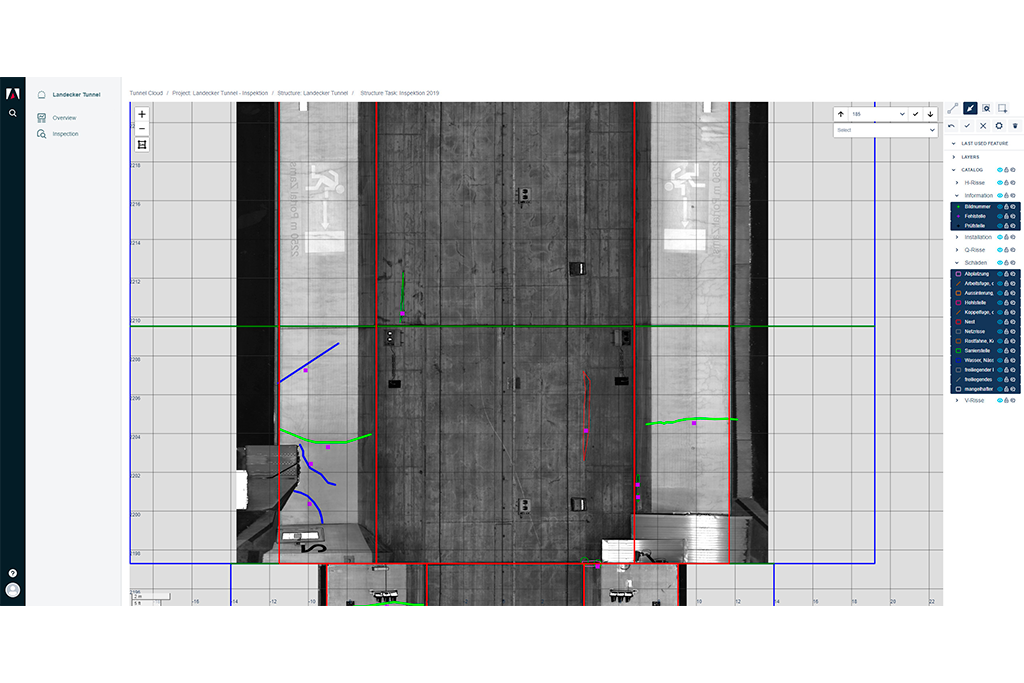 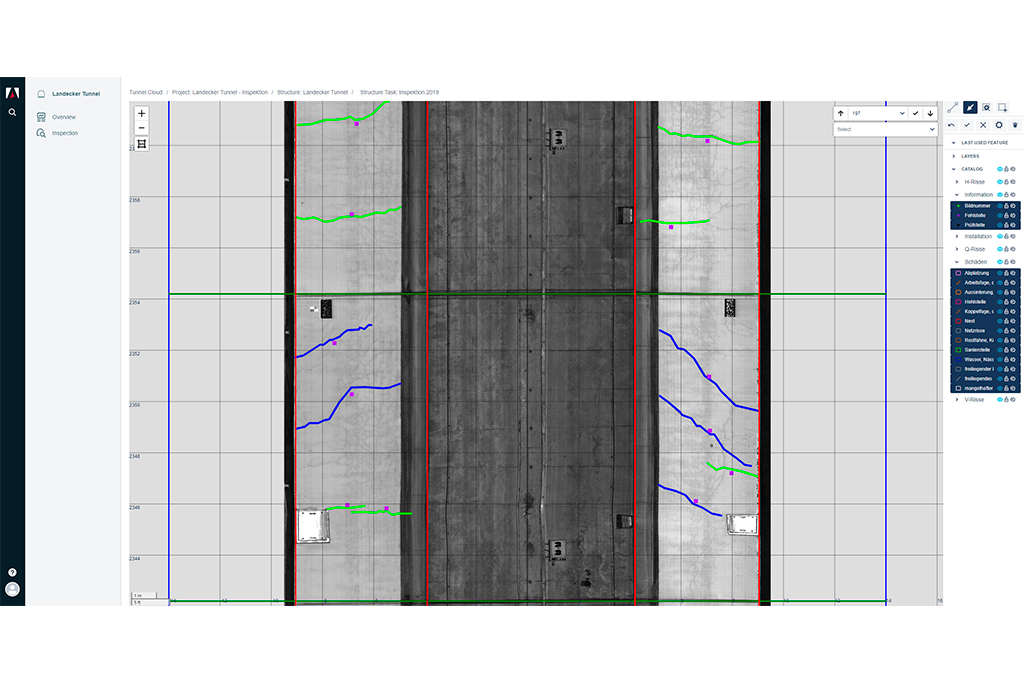 Visualization of the inspection data in Amberg Inspection.

What are the differences of an inspection with Amberg Inspection compared to the classic walk-through and visual inspection?

The main differences are mainly that the Amberg Inspection Cloud enables a detailed preliminary inspection to be carried out in the office and that this data is then available in the tunnel digitally on a tablet in high-resolution form and that no printouts have to be taken into the tunnel. Corresponding changes and damages that were not detected during the preliminary inspection can be added during the visual inspection in the tunnel and are then immediately available in the cloud. This means that the effort for post-processing can also be reduced to a minimum. Amberg Inspection also makes it possible to identify critical areas in advance and to carry out a correspondingly more detailed assessment on site.

How has Machine Learning supported the inspection process?

Machine Learning was not yet used in our case, as it was in its final development at that time. But the data from the Landecker Tunnel was used by Amberg Technologies after the inspection to test the Machine Learning system and very good matches were found between the damage we entered manually and the cracks we identified automatically using Machine Learning.

In what form were the evaluated data presented to the customer and what feedback did you receive?

The data was presented to the customer in the Amberg Inspection Cloud and the customer was very satisfied with the results and with the navigation in the system. ASFiNAG noted that they would have liked to see the damage in a 3D view as well. In this regard, Amberg Technologies has developed a system that can display both 2D and 3D scans. In the future it should then also be possible to visualise the damage in this 3D view.