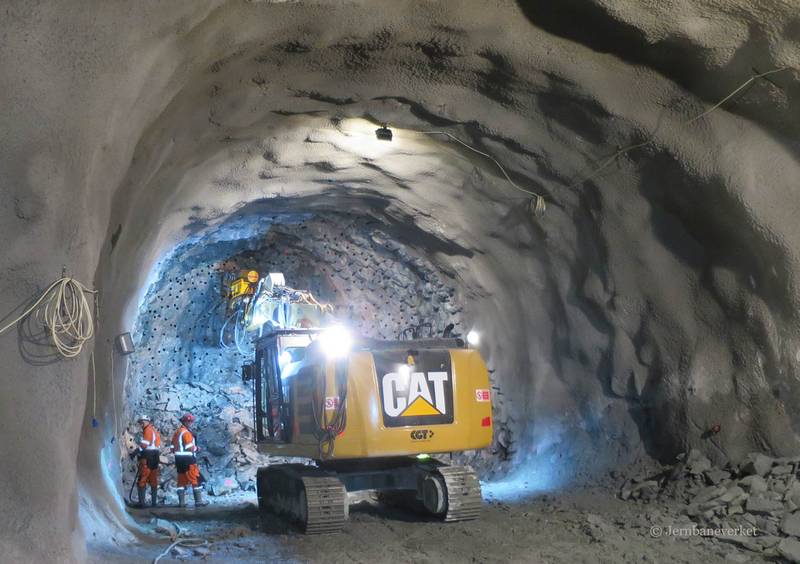 Norway’s longest railway Tunnel, the Follo Line project, reached a milestone on 6 July 2016 at 4pm, when the breakthrough of tunnelling took place.

Inside the Østfold Line main tube, the construction company Società Italiana per Condotte d’Acqua SpA and owner Jernbaneverket celebrated the event when tunnelling from the north and south met.

The tunnelling took place very near to an underground oil depot, making the project particularly sensitive. Our surveying team delivered particularly accurate measurements, allowing for only 4mm of lateral deviation and no height deviation, the work progressed and delivered a “precision landing”.

The complex geometry of the construction, which began at an existing road tunnel at Oslo’s Sjursøya enabled two access tunnels to be bored through hard rock in the Ekeberg hill. The route included S-curves, 90° junctions and inclination up to 12% slope, and therefore required particularly high degrees of accuracy in the surveying and execution stages.

Amberg Norge AS, the Norwegian subsidiary of Amberg Group, supported three of the four lots of the Follo Line project. The project will yet present challenges, including the EPC Oslo Central Station, which requires a cut and cover construction, to be achieved in Oslo’s quick clay ground, as well as an EPC Tunnel Drill and Blast, which requires 3500mm of tunnel to be blasted through. There will also be an EPC Tunnel with four tunnel boring machines to complete the excavation works.

“I am very proud of our key account Condotte and Amberg’s team. They have worked hard to achieve this target. It is good to see that they have proved themselves. Meanwhile tolerances are getting smaller and smaller, because we achieved this, but it is still a work of art, congratulations!”